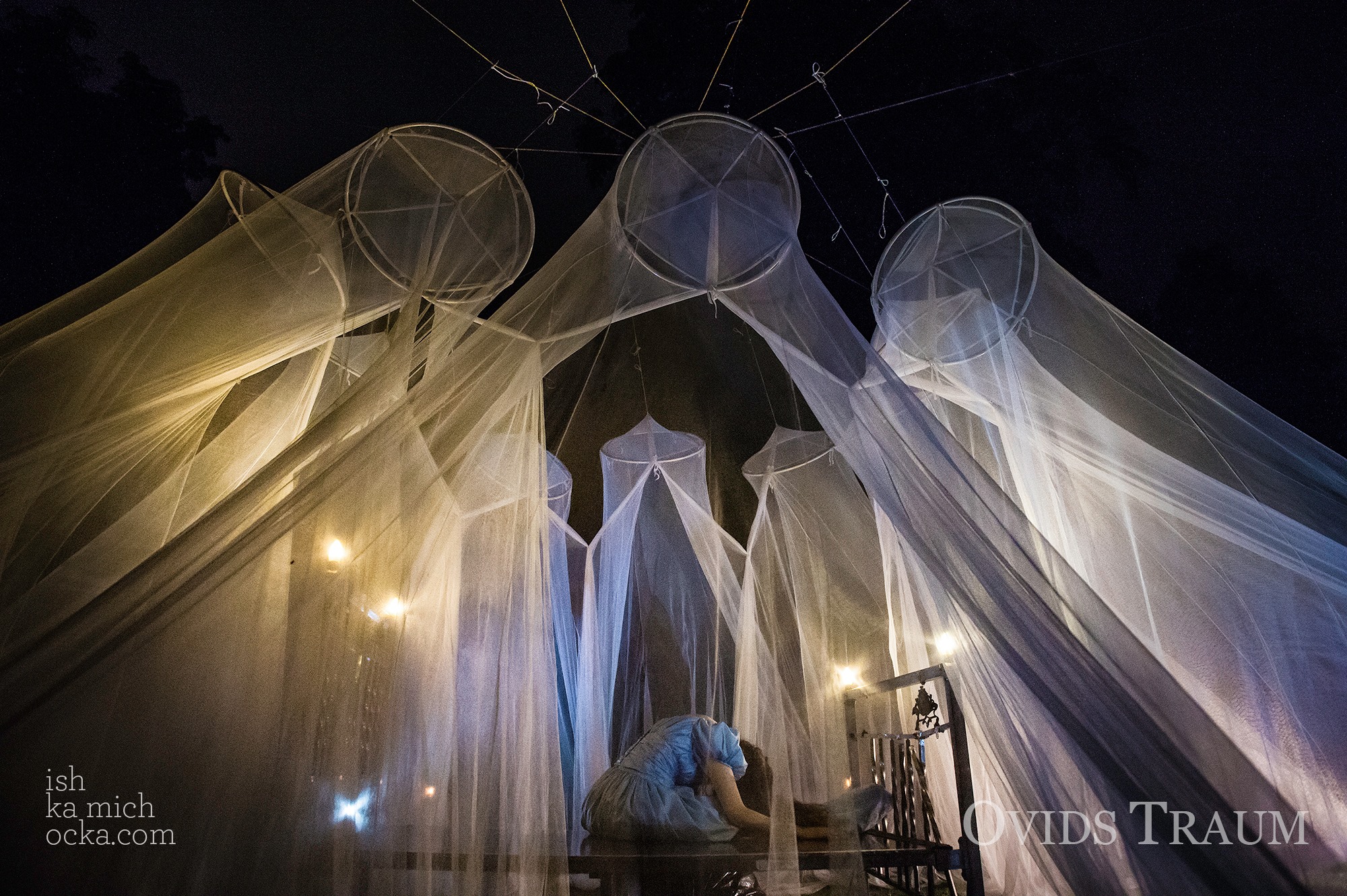 Summer dates 2014 “Ovid’s Dream – In the Garden of Transformations”

Ovid’s Dream – In the Garden of Transformations

“Her soft white bosom was ringed in a layer of bark, her hair was turned into foliage, her arms into branches. The feet that had run so nimbly were sunk into sluggish roots; her head was confined in a treetop; and all that remained was her beauty.”

In his narrative poem Metamorphoses, the Roman poet Ovid transforms people into trees, into stones, birds and flowers – into non-human beings.

In their new park production Ovid’s Dream Theater Anu embark on a poetic and sensory exploration of these metamorphoses, creating a ‘garden of transformations’. Visitors encounter the discarded hulls of the transformed: tongues of flame dart out of shoes; garments are reshaped into lamps; the fabric of clothes is unravelled and spun into new threads, entwined amongst trees, woven into massive cocoons. Visitors are free to wander through this magic place for two and a half hours, witnessing the metamorphoses and listening to the stories.

In nine scenes spread over different locations, dance, shadow-play and light-effects, installations and sound-collages create evocative images and tell familiar and unfamiliar stories, of Narcissus, Orpheus and Eurydice, Pygmalion, Phaeton, as well the Tree of Forgetting, and Rosa,  the woman who loved a tree. Seven dancers, from Italy, Spain and Germany, explore the mysteries of the metamorphoses. Their performances, lasting around ten minutes, are performed continually in a loop. The production allows the audience to get right up close to the action and yet can still be enjoyed by several thousand visitors on one night.

“Theater Anu deligh, enchant and disturb in equal measures with this production. Visually opulent and profound. The concept is ingenious: anyone who allows themselves two and a half hours’ time can immerse themselves in a fascinating interpretation of the ancient mythical world. Anyone less concerned with filling the gaps in their classical education can simply pay a fleeting visit and enjoy the extravagant frenzy of images, accompanied by haunting sounds.” | Sindelfinger Zeitung, 28 August 2012

“Passages from Ovid’s poems sound out over ethereal tones from loudspeakers while, suffused in a magical light, dancers enact the transformations which will grant the figures in Ovid’s Dream eternal life. Some visitors may well start to ponder, but anyone who responds to this production with their guts not their head will become immersed in a Shakespearian summer night’s dream and experience a new dimension of theatre.” | Kölnische Rundschau, 19 August 2012